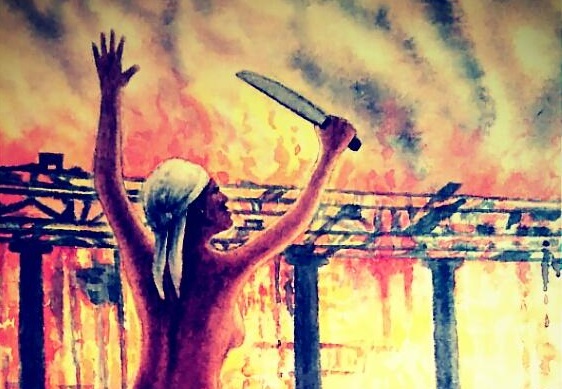 WordCrafts Press and author Thomas O. Ott are pleased to announce the release of his debut novel, Saturday & the Witch Woman, which released to retail on Wednesday, May 29, 2019. Based on meticulously researched historical events, Saturday & the Witch Woman follows the events leading up to and beyond The Night of the Fire, August 22, 1791, which began the great slave rebellion in Haiti. Thousands died. Hundreds of plantations were set ablaze. Yet amid the chaos, a slave named Saturday saved two white children. This is his story.

The Haitian war of independence began in flames. On The Night of the Fire 100,000 slaves rose up against their hated French overlords, burning every plantation, and executing every French man, woman, and child they could find. One slave, Kwambe Ansong, born on Saturday, Seventh Born Child, dared save the lives of his master’s two young white children, smuggled them to safety, and fostered them over a period of 40 years.

Delivered through a series of 11 letters, author/historian Dr. Tomas O. Ott, PhD, accurately describes the history and social landscape of Saturday’s time, telling the true version of his life, not just what plantation masters and their families wanted and even required hearing.

Despite being a slave, Saturday was literate, widely read, and spoke seven languages. As he unfolds his life’s story through his “epistles,” Saturday recognized the danger of releasing them during his lifetime, even to his “boys.” Thus it was not until Saturday’s death in 1850 that Philip Chartrand, the older of the two rescued children, learned the true story of Saturday and the Witch Woman.

“Saturday’s story waited 150 years to be told,” Ott muses. “I believe few who read it will ever forget it.”

The novel, which is available in hardback, trade paperback, and all major ebook formats, is already developing a following among readers. Saturday & the Witch Woman as both the hardback and trade paperback versions of the novel debuted on Amazon’s Hot 100 New Release chart in Southern Fiction.

Saturday & the Witch Woman, Ott’s debut novel, follows on the heels of his highly respected non-fiction title Haitian Revolution 1789-1804 (University of Tennessee Press), which is widely regarded as an important, authoritative work on the Haitian Revolution in academic circles.

Thomas O. Ott earned his Ph.D. in Caribbean history from the University of Tennessee. He authored The Haitian Revolution, 1791-1804 which stands as one of the important books on that subject. His interest in Haiti’s great slave rebellion has led him to promote the importance of its leader, Toussaint L’Ouverture, before academic and general audiences.

In 2010 Professor Ott retired from the University of North Alabama to write the story of Saturday, a slave on the French side of the author’s ancestors and a participant in the world’s greatest slave rebellion.

Ott writes from his home in North Alabama.