So—what has she “created?”

From the days of writing and performing drama for her church, winning the Grand Prizes in drama from the Gospel Music Association, and 13 years of using her gifts for Family Life, a regional ministry in New York and Pennsylvania, Sandy and Denny have lived the creative adventure God has penned for them. Now they have begun another chapter in their lives, in Nashville, Tennessee, working in the areas of film, TV, and, for Sandy, writing stories.

The Mirror Lies is her first novel. 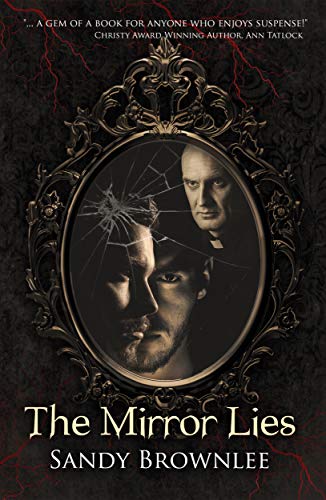 I put my hand to write this, the hand of the Lord, His mighty fist coming down to bring His judgment. Yes, so shall I bring it; so shall I bring the Almighty’s mastery over my domain. God help me in this righteous cause.

Graystone—the ancestral estate of the Graymoor family, a vision of marble staircases and stained glass, of rose gardens and high, white walls gleaming in the sun… at least it appears so in the imagination of Dr. Cliff Graymoor. The once grand mansion now lies unoccupied, decrepit, and decaying.

But Graystone harbors a secret; a secret someone is willing kill to uncover, and others are willing to kill to keep hidden.

Sandy Brownlee’s debut novel brings to life all of the things that captivated me as a child about agreat story. Suddenly, I was twelve again reading by flashlight after bedtime about the mysterious past of the Graymoor’s and their legacy. Complete with hidden rooms and secret diaries, old graveyards and dusty attics the atmosphere of The Mirror Lies is layered in mystery, history, and a well of secrets must be revealed before the truth is brought to light. Ms. Brownlee’s novel well serves all those fans of historical fiction with just the right dash of mystery, intrigue and romance.”

Author of Praying for Strangers