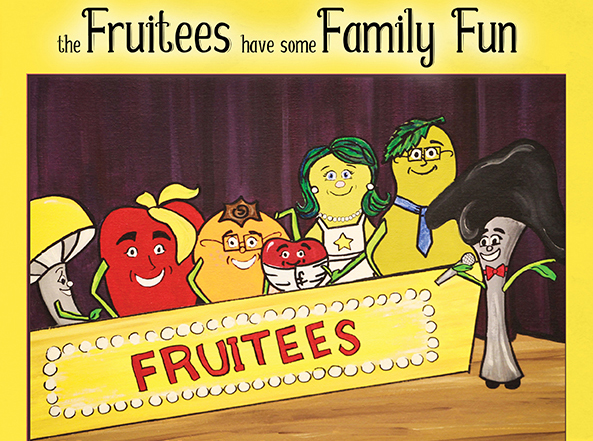 The Fruitee family loves to have fun together. When they have the opportunity to appear as contestants on America’s favorite television game show, “Family Fun,” they truly discover that the Family that Plays Together… Stays Together!

The delightfully whimsical children’s picture book, The Fruitees Have Some Family Fun, written by Michael Hendrickson and illustrated by Carlita Becker, which released nationally this month from WordCrafts Press, is the first in a series of adventures for the Fruitees family.

“The Fruitees were born in In 1991 as stories I made up for my children,” author Michael Hendrickson muses. “Little did I know that the Fruitees’ journey would take 28 years to see print. I was content as a young father to hold my sons in my lap and read to them while listening to their giggles at the adventures of the Fruitees. Now I believe that others may do the same.”

Meet the Fruitees family. What a pair Daddy Rudy and Momma Trudy are to their three sons. As different in personality as they are in appearance, Frick (an apple), Fred (an orange), and Baby Frack (a cherry) are mischievous, fun loving, and always ready for an adventure to share with their garden full of friends, including, FunGuy, a mushroom who loves playing games. In the debut installment of The Fruitees series, the family is selected to be contestants on America’s favorite television game show, Family Fun. Will the Fruitees and FunGuy have the answers? Win or lose, The Fruitees Have Some Family Fun proves the family that plays together, stays together!

“Contrary to popular belief, children’s picture books is one of the most difficult genres to work in,” says WordCrafts Press publisher, Mike Parker. “The ability to use a limited number of words to tell a complete tale that will capture the attention and imagination of a young child is an extraordinary gift. Finding an artist who can capture that story with just the right balance of wit and whimsy is equally rare. The team of Michael Hendrickson and Carlita Becker simply knocks it out of the park.”

The Fruitees Have Some Family Fun makes a perfect gift for that little one on your list. It is available in both hardback and trade paperback formats, as well as Kindle ebook. The Fruitees Have Some Family Fun is published in the U.S. by WordCrafts Press and distributed globally by Ingram Content Group, the world’s largest distributor of physical content.