Mike Parker is an actor, writer, director, playwright & screenwriter. He has authored three successfully produced stage plays including: Oscar Wilde’s Dorian Gray, Mark Twain Presents the Adventures of Tom Sawyer, and Mark Twain Presents the Adventures of Huckleberry Finn. He is currently working on a musical adaptation of The Count of Monte Cristo. His debut fantasy novel, The Scavengers, hit the shelves in 2009, he collaborated with Torry Martin and Paula K. Parker on the non-fiction book, Shameless Self Promotion: and networking for Christian creatives, and he contributed commentary for the Thomas Nelson’s bestselling Bible-zine, Real.

As a professional actor, he has appeared in regional and national television commercials, music videos with such popular artists as Dan + Shay, 3 Doors Down, and Thomas Rhett, in feature films including All Saints, Modern Prodigal, and Lukewarm & Season of Miracles; network television series’ Nashville and Outlaw Country; and the PBS documentary, Slavery By Another Name. He also produced and directed the independent feature film, The Trouble With Rain.

When he is not involved in some creative pursuit Mike enjoys hanging out with his beautiful wife, Paula, their five adult children, multiple grandchildren and assorted dogs and cats. Visit him online at mikeparker.info. 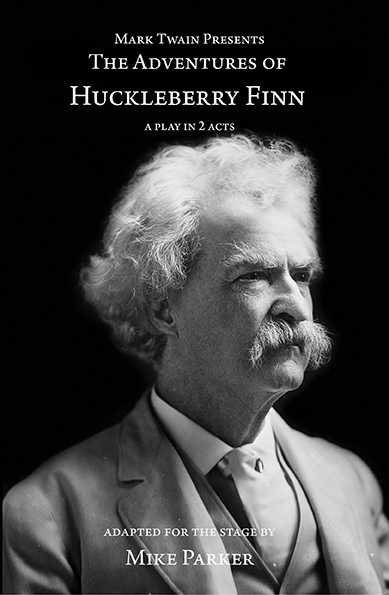 The Adventures of Huckleberry Finn

Mark Twain’s Great American Novel comes to life on the stage in this engaging new 2-Act play by playwright and novelist, Mike Parker

In a market full of post-apocalyptic fiction, it’s good to find one that’s truly inventive.